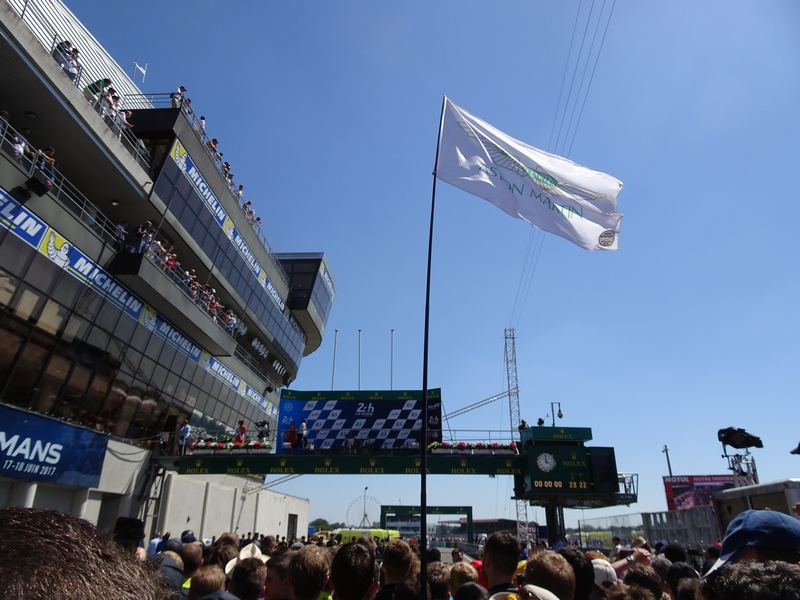 We had a good weather for Le Mans this year, but the temperature was fairly high. It went up to 30℃ in the daytime. The lawn was brown here and there and when wind blew sand dusts were heavy. People wanted to have rain but it didn't look like rain at all. My youngest daughter and I just remembered the fierce battle between Aston Martin DBR9 and Corvette in sweltering conditions at Le Mans 2005.

The intense heat just made me think that it might be tough for a Hybrid car, so it would be a race for the V8 Engine.

On June 16, the day before the race day, "Rolex President Cup" sponsored by AOC took place on the famous golf course of Le Mans Golf Club located within the circuit. The club house is at the corner of Mulsanne, and the golf course is just by the side of the circuit. The team Immun'Age was also invited to play in this President Cup again. Finishing 2nd last year, we were able to achieved a long-waited victory this year.

On June 17, the race started in the heat of the early summer sun. Rain was not expected at all and it started quietly without any accident.

In the GTE Pro Class, Corvette, Ferrari, Ford, Porsche and Aston took the lead by turns at some point in the exciting battle. Aston Martin #95 was having a good race as the 2016 WEC GT driver's title holder and leading at the 20-hour mark. Aston Martin #97 driven by Darren Turner, who has been challenging Le Mans with FPP(Immun' Âge) since 2005, had a tire puncture which cost him some extra time in the beginning, but eventually moved up to 3rd. It was a splendid race so far for Aston Martin Racing. However, Le Mans is never predictable. It was unbelievable that #95 could not turn a corner and got damaged at a few hours before finishing the race. It made a pit stop for repair, but there was no chance of podium any more. We placed our hope in #97 for the rest of the race.

The track temperature was near 40℃ and the stint was handed to from Darren, Serra to the last driver Adam.

Aston was only several seconds behind the class-leading Corvette, and they made their final pit stop at the same time at 23h15m. After Corvette emerged from the pit only 0.5 seconds over Aston, Adam showed a heated battle with Corvette Magnussen. Aston was faster at corners, and Corvette was powerful along straight. Although their distance became closer or further by turns, cool-headed Adam did not overlook Magnussen's mistake and snatched the lead at 23h57m to ensure the victory. We were very happy to be able to witness all the three class-victories of Aston Martin Racing at Le Mans, in 2007, 2008 and 2017.

Going slightly off topic, on the day before the Nürburgring 24-Hour race held from 27 to 28 May, my wife twisted ankle and broke her leg at the circuit. She recovered at a marvelous speed by taking FPP and using it as a poultice for pain control. In the end she was able to join the moment of victory at the Nürburgring 24-Hour race. "Break a leg" is an idiom in theatre such as Broadway used to wish a performer "good luck". I just thought my wife might have played a role in the victory of "Rolex President Cup" as well as the victory of Le Mans, by "breaking her leg" in reality.