It is usually cold this winter, but the cold eased a little while on February 7th and we had an exchange meeting with "Ono Association for Firefly Town".
The meeting was attended by Mrs. Michio Goto and his wife from "Ono Association for Firefly Town", Mr. Furuno from the Ono town hall and two members of environment control division of Osato Laboratory Inc. We exchanged opinions while walking along the small brook where we work for firefly protection.

Some said " It is very well taken care of to keep a good condition for firefly, such as good river flow, appropriate amount of weeds, enough soil for the pupal stage, etc." and the other said "We appreciate that a company has a leadership for firefly protection. It must be an unglamorous and continuous activity, but we hope you will keep doing what you have been doing."
I think that our ambitious environmental activity has been materializing little by little.
At the end of the meeting, we received larvae of firefly from the "Ono Association for Firefly Town" which they had been taking care of. 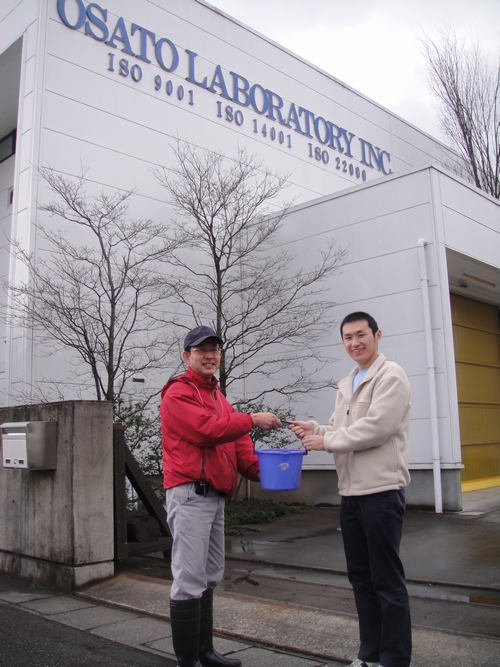 The larvae were handed from Mr. Goto.

The larvae were about 1 cm long and they school up without moving much in the beginning. But after a while, they started moving slowly in the bucket. The active move made us expect to see beautiful lights of firefly in early summer.