Osato Research Institute director Dr. Pierre Mantello and Olivier Bouche took a pole position in the qualifying round and claimed an amazing victory in the opening round at Silverstone.

Dr. Mantello had been attending an academic meeting in New York till the day before the race.
Although he is almost 60 years old, he tested Immun'Âge himself and proved the effect "Healthy Air Travel and Stress Free Driving" by overcoming jet lag and aging with the clinical trial using his own body.

Aston Martin chairman Mr. David Richards was also driving in dead heat with Dr. Pierre Mantello, but goddess of victory finally came out on lap 75 for Immun'Âge GT4 at Silverstone in a rain. 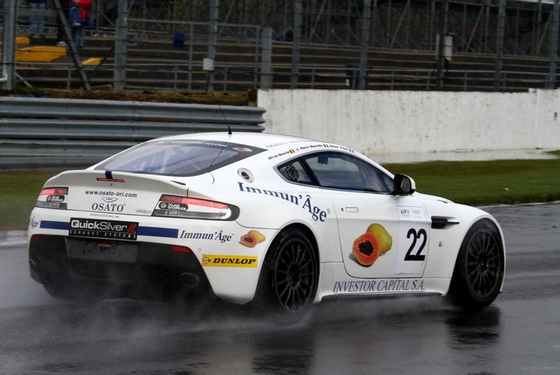 Maybe the rain was luck for a big guy Pierre, because he had a traction advantage due to his weight and it might have helped the car to be more stable. We cannot keep our eyes off the upcoming races throughout the season.