The FIA World Endurance Championship (WEC) Six Hours of Fuji was held on 18-20 of October, 2013 and Aston Martin Racing, which Osato Research Institute has been supporting as technical partner, won both GTE classes despite the race being marred by terrible weather conditions. The weekend started superbly with AMR qualifying on pole in both classes, especially with #97 taking pole. 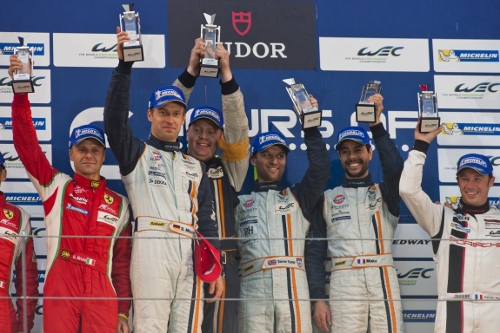 GTE Pro race winners of #97, from Fred Makowiecki (in left), Darren Turner (in center) and Stefan Mücke (in light)
AMR participated in this race with 4 machines of V8 Vantage and a team of 80 people in total in their centenary year and 10 people from Osato Research Institute including president, Mr. Hayashi participated as well as their technical partner.
This race was the 6th round of FIA WEC and held for three days at the FUJI International Speedway admiring the view of Mr. Fuji, which was registered on the World Cultural Heritage List.
The FIA World Endurance Championship (WEC) is one of the most exciting tracks in the world and features eight races including the legendary Le Mans 24 Hours and it was re-started in 2012 and this year is the second season. The four categories are used in the WEC: LMP1 and LMP2 prototypes and the GTE category, divided into GTE Pro for teams with professional driver line-ups, and GTE Am for teams featuring a mixture of amateur drivers.  World champion titles will be awarded to the top scoring manufacturers and drivers over the season. AMR's entries were #97 and #99 for LMGTE Pro class and #96 and #99 for LMGTE Am class in Fuji.
On the day of qualifying session, beautiful Mt. Fuji welcomed us being covered by snow for the first time this year.
Before qualifying, there was an event called "Media & VIP Guest Hot Laps in Aston Martin Vanquish and Rapide - Driven by Darren Turner and Stuart Hall" as well as a media interview with Aston Martin drivers held by Mr. Hayashi, president of Osato Research Institute, in the pit and paddock.  Later, final check-ups of the machines was made and there was a practice session and pit-walk for the fans.
The GTE class qualifying session started at 13:20.
In the qualifying session, two drivers make time attack and the starting grid will decided depending on the average of their best lap time.
Frederic Makowiecki in the #97 Aston showed super attack, and Stefan Mücke also made good time. As a result, in the GTE Pro class, #97 took pole on 1'39"114 and #99 took second on 1'39"591. In the GTE Am class, it was the #95 Vantage that took pole position on 1'40"649, with the #96 taking the third place on 1'40"824.

On race day, it was a terrible weather since morning with torrential rain occasionally.
Even in rain, there were some events such as pit walk, demo-run, and grid walk. However, the rain was falling more heavily when warm-up session started, some machines suffered spins and crash and had to start from the pit lane for repair.
The race started at 11:00 and the safety car led the competitors out onto the Fuji International Speedway. However, since the rain was getting even harder and the wet road became so dangerous, after eight laps the race director made the decision to put halt to the race for safety.
The race director restarted the six-hour race at 13:30. However, after another eight laps behind the safety car, the race was red flagged once more. All the machines waited for second restart in a line on the main straight.
The fans were also waiting for the restart of the race under rain for a long time and drivers made comments considering the fans.
The second restart of the race was announced at 15:35, and all the machines started warm-up. Usually the safety car run is supposed to be continued at least 10 minutes, and the safety cars comes back to the pit for actual restart of the race.  However, despite the second restart attempt, it was red flagged and ended up to be stopped leaving the #97 Vantage GTE with the GTE Pro race win and the #95 Vantage GTE finishing in first place in the GTE Am class, the positions in which they had qualified.
In accordance with the WEC regulations, half points will be awarded to each of the teams, as less than 70 per cent of the race was completed. These points left Aston hope to be a series champion.
The last two WEC rounds will be held at Shanghai on November 8-9 and at Bahrain on November 30. Aston made entry of 6 machines for GTE Pro class for Shanghai. Winning the titles is the sole focus for Aston Martin.