Effectiveness of FPP in sports is suggested in perspective of oxidative stress. 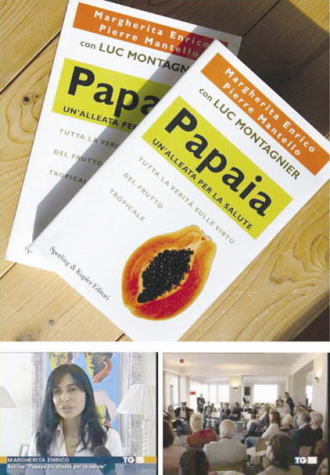 Ms. Margherita Enrico, a famous Italian journalist and Dr. Pierre Mantello, the director of the Osato Research Institute, published a new book on FPP.
On September 19, 2006, a press conference for the book was held in Milan, Italy, with 30 journalists and 200 celebrities in attendance.  Various newspapers covered the press conference, as well as several major Italian TV networks, including the "TG5 Evening News" which included an interview with Ms. Margherita Enrico.

Ms. Margherita Enrico wrote about how to glow old in a happier way, how to keep physical conditions and possibility of FPP as complement.  She also wrote about relation of oxidative stress and immune system in sports quoting many comments of some famous professional athletes.

Comment of Mr. Jean Alesi
As a professional athlete, I have been paying the closest attention to the life style and daily diet of my own.  I knew that excessive sports cause active oxygen.  My friend, Mr. Philippe Gache recommended me this anti-oxidant food supplement called FPP, so I started taking it.  In one week I started feeling less tired.  I still keep taking it regularly and have no more flu which I suffered quite often and it became easier to overcome stress both mentally and physically.

Comment of Mr. Philippe Gache
For the Dakar Rally 2005, I started taking FPP eight week before the race.  I felt less tired during the intensive training and did not suffer from cold as usual.  During the race, I could sleep well every night and did not feel as much physical fatigue as before.  After the race, I could get back to the rhythm of the daily life easily thanks to FPP.  I wish I could have found FPP earlier.